On the 14th of august we finally left Europe, and prepared to cross a real border for the first time.
As we drove through the Greek countryside we already saw a very, very big red flag in the distance, a Turkish flag very clear even from afar.
As we turned onto the highway for the final stretch of the road to the border I caught myself overthinking if I had everything, if I was ready for this crossing. It felt like leaving my house on that September morning for the first day at school in the new year. A strange feeling I hadn’t had for years…
As we drove up to the waiting lines we off course choose the shortest of the lines which is never the truck/TIR lines. This time we choose the touring car line. It seemed the border was closed, we couldn’t leave yet. Weird. A closed border, who would have thought such a thing existed…

After about an hours wait we were allowed to cross the border. Mind you, then you haven’t yet entered Turkey, you have entered no mans land. Fortunately this is a well stocked land, full of booze and cigarettes. And, as nobody owns this land, apparently nobody can raise taxes and therefore these vices are quite cheap here.

After we stocked up on the most essential supplies (for some reason they didn’t sell bread, weird huh?) we continued for Turkey, as we still wanted to leave Europe. After the shopping area you drive onto a bridge, a very long and well guarded bridge with well armed soldiers, concertina wire (a nastier kind of barbed wire) and various military vehicles. Because of all the military show and the general atmosphere of the place the thought that this bridge might be rigged with explosives entered my mind. In my head I could see a bunker, somewhere hidden in the bushes, just a stone’s throw away with two wires on a desk, and a little glass door-ed cabinet on the wall with a detonator box inside. Next to this cabinet some strange words, in strange lettering translating to:
IN CASE OF INVASION:
1.BREAK GLASS
2.ATTACH WIRES
3.PUSH BUTTON

This vision might seem dramatic but comes from the hostility that hangs in the air. The Greeks and Turk have a long history of not liking each other.

As we drove off the bridge we entered the Turkish control zone. Now it starts…
We decide that I’ll step out of the truck and ask the closest official which line we must take. I put on my most innocent face (which is hard in my case, if you know my face) and ask the gentleman which line to take, immediately explaining that it is a camper/caravan/tourist and other words I can think of to convince him we’re innocent, non-threatening individuals (in the back of my mind I still see the wall in the bunker). Luckily we ‘re pointed to the car line! As we slowly approach the checking station we can already see the curiosity on the border guards faces which we hope is a good sign. As we enter the checking station, one of the border guards approaches us with a big smile which we interpret as a good sign. It is. A young pencil pusher joins the border guard and as the guard enters the truck to start his round of checking, the pencil pusher starts asking me all kind of questions, with his eyes lighting up at my answers. Never before has he seen such a concept of freedom, and just doing what you want to do.
I hope we’ve inspired him, it seemed we had, and I hope we planted a seed in his head.
Surprisingly the border guard completely ignores the dolphin skeleton strapped in plain sight on the chassis. The pencil pusher however spots it, asks what it is, and, after hearing the answer breaks out in a huge laugh. If there was any tension, it’s gone now.
A bit later, at the checking point’s office while filling out and exchanging paperwork with our favorite pencil pusher one of the border guards approaches us with a smart phone in his hand, tuned to YouTube and asks us if we’re a soundsystem. Yolene and me look at each other and laugh the suggestion away. 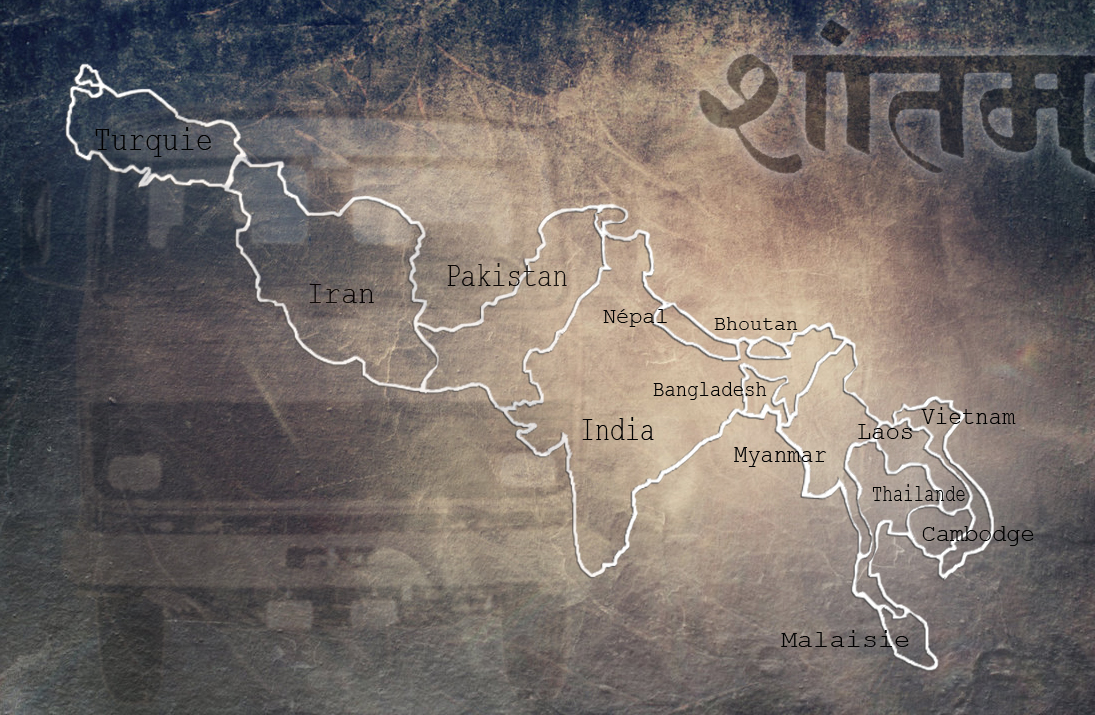